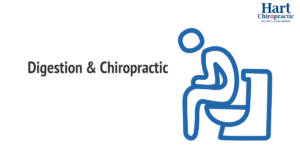 No one likes to talk about it, it’s embarrassing and uncomfortable, but for many patients, very easy to get relief without the use of any drugs, especially children.  One of my favorite patient phone calls to get is the one from a happy mom calling to say, “it happened! They finally pooped!”

Over $80 billion are spent each year on drugs to relieve heartburn, acid reflux, bloating, gas, irritable bowel, constipation, diarrhea and other digestive disorders. These symptoms of abnormal digestive are becoming increasingly more prevalent in our society. Science and research have shown that chiropractic care offers a powerful solution to this modern-day epidemic.

Chiropractors search for the location of such spinal misalignments termed `subluxations.` A specific chiropractic adjustment realigns the altered regions and restores nerve supply to the deficient organs. This approach honors the body’s innate ability to heal and works to harmonize this incredible life force in order to enhance organ function & quality of life.

Several studies have demonstrated the power of chiropractic adjustments restoring optimal function in individuals with digestive disturbances. In a published case study, a young woman had been afflicted with IBS symptoms once or twice a week for 5 years. After one adjustment she noticed an easing of symptoms and within a short time all her digestive problems disappeared. When the report was published 2 years later, she was still symptom free.

A 2008 study demonstrated how effective chiropractic care is for infants with digestive disturbances. Researchers chose three infants who were experiencing infrequent bowel movements from once a week to once every 3 or 4 days. Parents of these infants had tried several different laxatives and other procedures recommended by their medical staff. They had also followed specific dietary changes and the use of cod liver oil and mineral oil without any results.

The infants began chiropractic for periods ranging from three weeks to three months. According to the study author Dr. Larry S.Arbeitman, D.C., ` All three experienced almost immediate improvement. By the end of the study all three had bowel movements at least once every day.`

Subluxations within specific areas of the spine can prevent the bowel from functioning properly. Throughout the years it has been common place to see instances of people of all ages who have not had a bowel movement for days experience almost immediate relief after an adjustment. Regular chiropractic care can help patients establish a more natural rhythm of comfortable, effortless elimination.